See how Goldtouch helps the bottom line for Enterprise Clients. GET STARTED

How switching keyboards helped save a Fortune 100 Company  $14 million

Repetitive Strain Injuries (RSIs) have become a significant cost of doing business, resulting in more than $20 billion in direct workers’ compensation costs annually within the US. A diverse range of companies — including Goldtouch — are confronting the root of the problem by implementing preventative initiatives for issues like RSIs.

In an effort to improve its health and safety programs, this Fortune 100* company* took a hard look at its workers’ compensation claims and costs. That research showed that many  claims were related to Repetitive Strain Injuries. These injuries ranged from backaches, shoulder and elbow problems, to more serious issues like carpal tunnel syndrome. Based on these findings, the company’s safety department proactively implemented a full Health and Safety program that included a Repetitive Strain Reduction Initiative.  This initiative decreased not only employee discomfort, but also the severity of workers’ compensation costs.

In the initial Repetitive Strain Reduction Initiative, approximately 30% of the company’s workforce (roughly 22,000 employees) were involved with the program. Each employee that was part of the initiative received a Goldtouch Adjustable Keyboard and was monitored over the next 24 months. Within two years, the company’s annual workers’ comp costs decreased from $27.7 million dollars to $13.4 million. In addition, the number of repetitive strain injuries decreased by 71% over the same two-year time period. 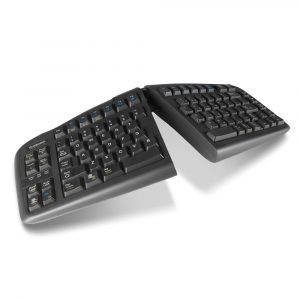 After the two-year program, participants were surveyed for additional feedback. The following observations were made: 94% of the employees involved in the initiative said that they would recommend the program to a colleague, and 92% of participants said that they now work more comfortably. After the initiative was completed, the company began a worldwide rollout of the Goldtouch Adjustable Keyboard for every employee in their office. Today their entire workforce uses Goldtouch Adjustable Keyboards.

Goldtouch has been privileged to be a part of the solution, and we’re thrilled to share just one of our many success stories with you. We’ve worked with hundreds of organizations to help enhance their health and safety programs. In fact, Goldtouch products are utilized by over 90% of the Fortune 1000 companies around the globe.

Feel free to contact us with any questions or concerns.